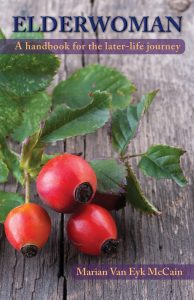 What I like most about this book is that it genuinely celebrates the late afternoon and evening of our lives. Most biographies draw the human life as though it were a hump – starting small, growing towards the prime, and then downhill all the way, leading to death often in depression and failed faculties.

But Marian Van Eyk McCain’s Elderwoman is an energetic, wise, purposeful person, garnering her life’s wisdom and with much to offer those around her. As the sub-title says, “Reap the wisdom … feel the power … embrace the joy.” I also like her idea of what normality is: “the steady beating of our hearts, the rhythm of our breath, the movement of the seasons, rain on the roof, moss on stones … the cyclic progression of all living things …”

The book is divided into the four sections of Earth, Air, Fire and Water. Earth is about the ground on which we live; the relationship we may have to our home and sense of place, and to the other creatures around us. And how we can, often after an alienated early life, find a sense of being “at home on the Earth” as we grow older. The themes of simplicity and lightness pervade the chapters on air, and McCain has a strong appreciation of silence, and the depth of experience that needs space. Fire is about energy of several kinds – political awareness and action, sexuality, a sense of proportion and spirit beyond and within oneself, a continued willingness to live with risk. And finally water is about saying “yes” to what she calls a radical aliveness, in spite of being – or perhaps because of being – less sprightly, indeed maybe positively creaky, in body.

What I had most difficulty with was her acceptance of the traditional division of a woman’s life into three parts – maiden, mother and grandmother. McCain is certainly very careful to indicate that, for instance, the mothering may be not only about having children but also about creating organisations, books, work of many kinds, communities. But her division does not describe my life or the life of many women I know. I was never a ‘maiden’ in the sense of wanting ringlets, or comparable adornments. I’ve never had, or wanted, children of my own, and I’m therefore not a grandmother and don’t really feel like an elderwoman, though I am the right age. As an alternative, I could readily accept as a model the Hindu division of life into youth, householder and contemplative, though the last two, for me, are not easily divided into two stages. But would these descriptive stages suit everyone either? I’m sure they wouldn’t.

The lives of both women and men are now very diverse in Western society, so that we perhaps need to re-examine traditional taken-for-granted stories about their shape. Books on ageing and its implications by Theodor Roszak, Ram Dass and James Hillman, all of which McCain quotes, tend to examine the common experience of men and women in coming to terms with the opposites within which we live – male and female, material and spiritual. These three accounts, however, tend to emphasise the male experience of later life to different degrees. I believe McCain’s book is intending to do something similar for women; but I wish she’d gone a few steps further in countering gender and life-patterning stereotypes.