‘The Master and his Emissary: The Divided Brain and the Making of the Western World’ by Iain McGilchrist 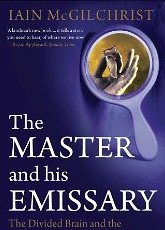 This is one of the most important books that I’ve read. I heard Iain McGilchrist talking about it on the radio when it was first published and just knew I had to read it. It’s a weighty tome (both in size and content), covering both the structure of the brain and how the brain’s structure and function has shaped Western culture. McGilchrist is eminently suited for the task, as he taught English at Oxford University before training as a psychiatrist and is therefore able to express complex ideas in simple, attractive ways.

The ‘Master’ and ‘Emissary’ of the title are the right and left cerebral hemispheres, which as we know, operate in slightly different, albeit potentially co-operative ways. McGilchrist argues that the Emissary (the left hemisphere) has usurped the Master (the right hemisphere). Thus Western civilisation is currently being run by the one that knows the least but thinks it knows everything, with potentially disastrous consequences for us all.  One is reminded of the Sorcerer’s Apprentice who causes havoc in the Sorcerer’s castle while his master is away. Except that here we are not dealing with mops and pails of water that won’t do as they’re told, but with a power struggle between two parts of our brain that see life in two significantly different ways.

I found both parts of the book full of fascinating insights, with plenty of ‘Aha!’ moments.  The first half of the book is headed ‘The Divided Brain.’ For example, Chapter 2 ‘What do the two hemispheres ‘do’?’ describes in fascinating detail the differences between the two sides of the brain—which, by the way, are far more subtle and complex than most of us were taught—and the way these two halves communicate and co-operate. It explains how both hemispheres are involved in every thought and action, but in different ways. For example, not only in humans but in most other species, “the left hemisphere yields narrow, focused attention…The right hemisphere yields a broad, vigilant attention…” It describes the effects on a person’s power of perception when one or the other hemisphere is out of action, either because of a medical condition or for the purposes of research.

The second half, entitled ‘How the Brain Has Shaped Our World’ shows how the left hemisphere has duped us into believing it is the dominant partner and that its detached, way of seeing the world as something separate from ourselves is the only way. For example, in Chapter 9 ‘The Renaissance and the Reformation,’ McGilchrist describes a pivotal point in the cultural history of the West. The Renaissance was one of the last times that the hemispheres acted cooperatively. It marked the rediscovery of perspective, which had been forgotten about since the time of the ancient Greeks – another period of balanced hemisphere function.  McGilchrist argues that when right and left hemispheres cooperate, we find periods of human flourishing. Reason, creativity and imagination are enhanced, along with a sense of being part of something greater than oneself.

As I read this book, things started falling into place and I could make better sense of the overly regulated, highly bureaucratic and culturally impoverished world we live in today.  This is the world of left hemisphere dominance.  McGilchrist is keen to point out that a world dominated by the right hemisphere would be equally nightmarish, but in a completely different way.  Our task is to heal the division between the two hemispheres.  He has said elsewhere that people have become aware of the ‘silent partner’ (right hemisphere) after reading the book.  This could be the first step on the road to restoring the balance within ourselves and our culture and moving into a new period of human flourishing, and this is why I urge as many people as possible to read this book.