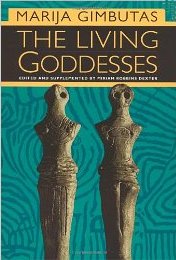 Reviewed by Jean Hardy  (for the 1999 hardback edition)

According to Miriam Dexter, Marija Gimbutas, who was Lithuanian by birth, “was an ecologist decades before the word became popularised, and her home in the hills of Topanga, California, reflected her love of nature. This love became a foundation stone in her philosophy of life and her personal spirituality.” The Utne Reader said of her, “UCLA archaeologist Marija Gimbutas turned historical scholarship on its head in the ’70s and 80s with research that depicted peace-loving, co-operation-based Goddess- worshipping societies in ancient Europe which were overrun in the Neolithic era by Indo-Europeans who imposed patriarchal order. Gimbutas’ vision of an earthfriendly, feminine-centered spirituality has sparked religious awakening; an estimated 400,000 Americans now declare themselves neo-pagans, and many more with feminist or environmentalist leanings are helping revive Goddess worship.”

In her distinguished career Marija Gimbutas held senior positions at Harvard University and became Professor of European Archaeology at the University of California at Los Angeles. She directed a number of archaeological excavations in what was Yugoslavia, Greece and Italy. Her life’s work has been aimed at uncovering and reclaiming for us today the way of life and spirituality of the Neolithic peoples of ‘old Europe’, a task in which she has been spectacularly successful.

In this book Marija Gimbutas provides us with a scholarly but also readable account of the Goddess tradition of Europe from the late Palaeolithic and Neolithic eras, through the megalithic and henge building periods and into recorded history.

In the prehistoric periods, the overall picture is of a deep spirituality supported by a complex and sophisticated structure of ritual and symbolism. During this time, “the woman’s body was regarded as parthenogenetic, that is, creating life out of itself. This ability was celebrated in religion [which] centred on the feminine power, as shown by the abundance of female symbolism. Just as the female body was regarded as the goddess creatress, so too the world was regarded as the body of the goddess, constantly creating new life from itself.”

It seems that Cretan (Minoan) spirituality, which was the last of the Old European cultures to fall under the influence of the patriarchal Indo-Europeans, celebrated two aspects of the Goddess: in relation to death and regeneration, taking place in the dark and associated with the cycle of the seasons, and in relation to the birth of new life, taking place in the light.

The second half of the book looks at the survival by assimilation of aspects of Old European culture and spirituality into the patriarchal and God worshipping cultures of waves of Indo-European invaders. We are treated to studies of Classical Greek, Etruscan, Basque, Celtic, Germanic and Baltic religious traditions, in all of which the Goddess survives. Only the Basque people still speak a pre-Indo-European language. The Goddess Mari is still worshipped there today and a lunar calendar and matrilineal inheritance survived into the early part of this century.

Among the Celtic peoples the Goddess survives in art and symbolism, legend and folk-law particularly in Wales and Ireland, the last strongholds of Celtic culture. The great Goddess of Wales is Rhiannon who is found in the Mabinogi. In Ireland she survives as the Mórrígan, Ana or Danu of the Túatha Dé Danann, as Queen Medb of Leinster who appears in the saga of the Táin Bó Cuálnge. There is also Brigid who in the guise of a Christian saint is venerated today.

In Marija Gimbutas’ homeland of Lithuania a full pantheon of Old European Goddesses survived well into the twentieth century and as Miriam Dexter says, “these deities peopled the landscape of her spirit.” As Europeans, the Goddess culture is, by inheritance, part of the landscape of our spirits. This book can help us to shape that legacy into a source of inspiration and an affirmation of the Earth and of the cycles of Nature. It will help us to look into our native myths, folk-tales and customs and those of the rest of Europe and to see through them into the spirituality of cultures that persisted for over four thousand years and in which women and men lived in harmony with each other and with the Earth.