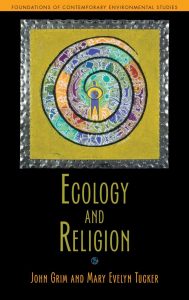 These authors’ many years of studying world religions and their particular interest in the relationship between religion and ecology have given them a deep appreciation of the remarkable diversity of religions our world contains and of their ecological dimensions.

As they have discovered:  “Even when the forces of modernity have diminished human connections with nature, they persist in local festivals, in rites of passage, in parables and stories, and in subsistence knowledge related to food and healing practices.” They have both travelled widely, both through the literature and on the ground, to find these persistent links.

Religion is often what shapes our understanding of the natural world and of course, as Grim and Tucker point out: “…religions themselves have been formed by their interactions with landscapes and the life therein…Now both religious ecologies and religious cosmologies are being re-examined and reformulated alongside scientific understandings of nature.”

Having lived and worked for some years in Asia, Tucker has a deep interest in—and knowledge of—Asian religions whereas Grim has developed a particular interest in indigenous spiritual traditions such as those of the Native Americans plus various different strains of shamanism. Both of them studied for many years with Thomas Berry and went on to organize a ten part conference series at Harvard on world religions and ecology from 1996 to 1998. This led to the formation of the ongoing Forum on Religion and Ecology which is now a network of some twelve thousand people and organizations around the world.

As a result, many new classes and courses have sprung up and this book, which bears the fruit of many years spent helping to develop dialogue between religion, spirituality and science, is designed as an introductory text for use in that new academic arena. I believe it will fulfil its role very well indeed. It is densely packed with an impressive amount of information but although written in a careful, academic style it is interesting and readable.

Religion and Ecology tells a little of the authors’ own stories and the development of this field of study. It takes both a panoramic view of the subject, such as in Chapter One’s overview of religions around the world, and a series of ‘close up’ looks at certain topics, such as Chapter Seven’s in-depth study of Confucianism. I particularly appreciated, in this latter chapter, the mix of writing styles, from academic when explaining the foundational elements of Confucianism to journalistic when describing a recent visit to speak to Chinese scholars on ‘a steaming hot day in Beijing.’ “By mid—afternoon we found ourselves at the Chinese Academy of Social Sciences talking with scholars who had read the Harvard volumes on religion and ecology Indeed, not only had they read them, they had assembled a team of scholars and over a period of several years translated the volumes on Confucianism, Daoism, and Buddhism into Chinese. Such remarkable dedication to such detailed work. And why? Because they are living in one of the most polluted countries on the planet and want to find environmental values and ethics based on their own cultural traditions that are applicable to China.”

Between them, these authors have probably done more than any academics anywhere          to bring religious and ethical perspectives into environmental discussions, not only in their own country but everywhere. They believe that: “…by engaging in dialogue with the ecological sciences, religious practitioners can gain insight into how ecologists value nature for conservation, for aesthetics, and for ecosystem management. At the same time, scientists may appreciate how religions have woven humans into nature with rituals, symbols, and ethical practices. The relationship of science and religion may thus be enhanced in a shared concern for our planetary future.”

As academics tasked with bringing the fruits of their thought and study to the coming generations, they have created a highly thought-provoking textbook. Yes, it clearly is a textbook—there are study questions at the end of each chapter—but you do not have to be in college to read it and to benefit from the wealth of knowledge and wisdom it contains.