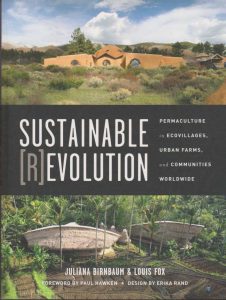 As a huge fan—and long-time practitioner—of Permaculture, I would have found it hard not to be inspired by this beautiful, lovingly-compiled and lavishly-illustrated book. What I am hoping, though, is that copies will find their way into the hands of many who have yet to be introduced to this powerful way of thinking that Mollison and Holmgren, back in the 1970s, labelled Permaculture. And I hope that every one of those readers will be inspired to find out more and to apply those teachings in their own lives so that they may join the growing band of people trying to live sustainably on Earth.

Permaculture is not just a way of growing food efficiently—though it certainly does teach that—but a set of principles and ethics that can usefully applied to every facet of our lives. This is because it is based on studying and emulating the ways in which Nature herself does things. After all, if we really want to learn the art and skill of living and thriving on our home planet, what better teacher could we have?

What started as an academic conversation in Tasmania forty years ago is now a worldwide movement. And there could be no better illustration of its growth and evolution, and its amazing diversity, than what is presented here: a tour around the entire globe visiting no fewer than sixty different—and all equally inspiring—projects based either directly or indirectly on Permaculture concepts. These range from desert reclamation in the hottest, driest area in Jordan to the re-establishment of forest in India to educational urban farms like Melbourne’s Ceres and from long-established communities such as Findhorn on the north coast of Scotland to a newly-established eco-village in Kenya.

An impassioned Foreword by Paul Hawken begins the teaching, after which we are led gently but briefly through some excellent explanations of Permacultural principles and ethics. Then, by page 28 we are already setting off for our mind-boggling tour around the world, visiting all manner of places and people and innovative projects and learning something new and interesting at each stop.

This is a well designed book. Not only is it divided neatly into climatic zones, with examples from each zone, but it also makes figurative use of several of the practical design templates from Permaculture itself, such as the zone concept. Traditionally, Zone 0 is the homestead itself, with Zone 1 the immediate land surrounding it, in which we place things we need to visit often, like clothes line, veggie garden and woodpile. Zones 2 and 3 are for things like fields and orchards that need less frequent attention, and Zone 4 is wild land for foraging. In this book, we actually start at Zone 00 which is where the heart and soul reside, for the first ‘field visit’ the authors take us on, right in the Introduction, is to the spiritual teacher Thich Nhat Hanh in his Plum Village community in France. This is to emphasise a point that many people either forget or ignore, which is that Permaculture is much more than simply a method of homesteading sustainably and growing food; it is a spiritually transformative process as well as a physical one.

My only criticism of this book is that the very small type and pale ink would make it difficult reading for people with vision problems and is offputting for anyone whose eyes, like mine, are no longer young. (Sadly, many book and website designers these days unintentionally limit readership by not taking this age factor into account.)

Apart from that, however, I have nothing but praise for the book, for the team of researchers who brought it together and for all those people in all those communities who are pioneering the lifeways we all need to adopt if we are to survive. They are the Noahs of our times, carrying the theory and praxis of sustainability forward into whatever world is going to be left when and if the destructive tides of anthropocentrism finally recede. I just pray they will all survive the flood.