‘The Prostitute State: How Britain’s Democracy Has Been Bought’ by Donnachadh McCarthy 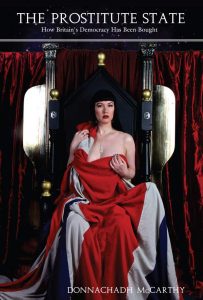 In this book, Donnachadh describes his time in the Liberal Democratic Party, rising to the position of Deputy Chair and his subsequent disillusionment with corporate greed, politics and the wider economic system. The book is well researched and wide ranging; covering such subjects as tax avoidance, the press, politics and unfettered capitalism.

What I like about the author is that he walks his talk. He recycles, buys from farmers markets and really takes a great deal of trouble to live ethically and with low impact on the Earth. And he has been brave: for instance he put up with the possibility of being sued by powerful people. For me, this adds significantly to the words he is saying – he is coming from an authentic place and his values are consistent with his actions. He says:

Leading by example is essential, because we cannot be effective advocates for ending the corporate state, if we ourselves are not free from its tentacles. Otherwise we will end up like the Lib Dems, who failed to deliver so many promises in government because they failed, in many ways, to run themselves in line with their principles prior to being in government.

I used to think that, with minor exceptions, we have a reasonable democracy, people’s views can be properly represented and that the press is, by and large, trying to report all of the facts. I was wrong. Our democratic system is in need of a major overhaul and the press needs to become the voice of the people.

Here are just 3 quotes from the book which shocked me:

It is really important to realise that combined tax avoidance and illegal tax-evasion is costing the UK about £100 billion every year, whilst welfare fraud, which is almost permanently on the front pages of The Prostituted Press, is costing just about £1.2 billion.

And whilst the poor guy who stole bottled water in the 2011 riots went to jail, the robber-barons from the big banks made off with huge multi-million-pound severance bonuses.

It has been estimated that for each of the UK’s 646 MPs there are twenty-two full time professional political lobbyists. The £2 billion spent annually on lobbying government is the equivalent of over £3,100,000 per MP.

Surely, if we are part of a wider society that has sent people to the moon, we are working out how the universe has evolved over its 14 billion year history and we are finding out about the basic building blocks of matter through an absurdly complicated machine that is 27 kilometres long on the French/Swiss border (CERN); surely if we are doing all of that, we can devote equal or more energy, skill and resources to making our society fair for all.

Perhaps the book is best summed up in McCarthy’s call for action:

All corporate power comes from us, the consumers and voters. By taking back our own power, we can put in place the building stones for a genuine democracy, a fairer economy, healthier communities and a beautiful, protected and loved environment. Yes We Can! And Yes We Must!

This book made a big impact on me and I have found it to be a real wake-up call.