‘The Rebirth of Nature: The Greening of Science and God’, by Rupert Sheldrake 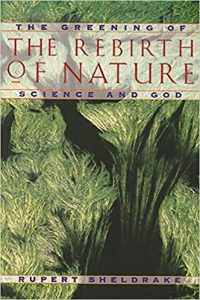 Most GreenSpirit members will already be aware of Rupert Sheldrake’s fascinating theory about and research into morphogenetic fields and resonance – how through evolutionary creativity and interconnectedness, new patterns of organisation come into being, and through repetition, they become increasingly established and habitual. The Rebirth of Nature (funded partly by the Institute of Noetic Sciences) first fell outside my radar for reading until recently. I am delighted to have now discovered it, and also pleased to see the late GreenSpirit member Chris Clarke mentioned in its Acknowledgements.

In the Introduction, Sheldrake shares a story of when he was young and how he asked his uncle about a row of willow trees on a farm with rusty wire hanging from them. His uncle explained that the trees had once been merely a fence made out of willow stakes that had wonderfully come to life. The explanation his uncle gave, Sheldrake informs us, filled him with awe, and later came to sum-up much of his scientific career and research into plants, and led him to a general theory of aging, death and regeneration in both plants and animals.

The Rebirth of Nature presents many of Sheldrake’s scientific and Nature-centred insights about our evolving Earth and Universe, with their inherent memory and abilities to create. His ideas contrast sharply with mechanistic scientific views about the natural world and Cosmos being nothing more than regulated machines. The latter of which has arguable led humankind to not caring enough about the Earth, her abundant life and ecological balance. A central and crucial theme running through the book encourages us to move beyond seeing Nature as inanimate and purposeless and draws on a variety of themes, including ancient myths, traditions and beliefs of both East and West, especially ideas about the divine feminine. The book also includes ideas by important thinkers from last century such as Teilhard de Chardin and his teachings about the Omega Point.

I personally see Sheldrake as a wise teacher for our times, who positively highlights how developments in scientific thinking can be seen as leading to a new synthesis in which traditional wisdom and scientific discoveries can meet and be mutually beneficially enriching. The book is nicely laid out in three parts and covers an array of green and Gaia-centred topics: 1. Historical Roots; 2. The Rebirth of Nature in Science; and 3. The Revival of Animism. Part One has chapters on Mother Nature and the Desecration of the World; The Conquest of Nature and the Scientific Priesthood; and Returning to Nature. Part Two covers The Reanimation of the Physical World; The Nature of Life; Cosmic Evolution and the Habits of Nature. Part Three includes chapters on The Earth Comes Back to Life; Sacred Times and Places; The Greening of God; and Life in a Living World. The book’s final passage mentions a New Renaissance:

As soon as we allow ourselves to think of the world as alive, we recognize that a part of us knew this all along. It is like emerging from winter into spring. We can begin to reconnect our mental life with our own direct intuitive experiences of nature. We can participate in the spirits of sacred places and times. We can see that we have much to learn from traditional societies who have never lost their sense of connection with the living world around them. We can acknowledge the animistic traditions of our ancestors. And we can begin to develop a richer understanding of human nature, shaped by tradition and collective memory, linked to the earth and the heavens, related to all forms of life, and consciously open to the creative power expressed in all evolution. We are reborn into a living world.

Although this title is an oldie, I feel it is also a goldie! I recommend The Rebirth of Nature for its evident breadth and depth of vision and importance for our times. Not only does it make for an excellent read on essential green teachings and wisdom but can serve as an important reference book and wonderful addition to any eco-spiritual reader’s bookshelf.

Of additional interest is in 2020 Rupert Sheldrake did a talk for YouTube which used the title of the book: www.youtube.com/watch?v=90fD3FWL53s.