A unitive new narrative of the Universe, Gaia and Us

Jude will share how scientific breakthroughs at all scales of existence and across numerous fields of research are now revealing a radical new view of reality. Presenting an emergent WholeWorld-View, its unitive new narrative converges with universal wisdom teachings to reveal a conscious Universe that meaningfully exists and purposefully evolves as a multi-dimensional, nonlocally unified and sentient entity.

With its in-formed appearance arising from deeper non-physical realms of causation, the evidence is discovering that, fundamentally, mind and consciousness are not something we have but rather, what we and the whole world really are.

Indeed, our Universe exists TO evolve; from simplicity to complexity and diversity, ever greater levels of individuated and collective self-expression, self-awareness and conscious interdependence.

On a global scale our planetary home, Gaia’s continuing emergence is embodied in collaborative and synergistic relationships and dynamic coevolutionary partnerships. And where, now, the conscious evolution of humanity may be realized as an integral part of our planet’s own evolutionary progress and purpose. 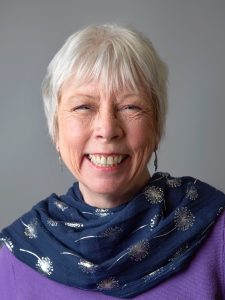 Dr. Jude Currivan is a cosmologist, planetary healer, futurist and author. She was previously one of the most senior business women in the UK, is a member of the Evolutionary Leaders Circle and in 2017 co-founded WholeWorld-View, seeking to empower the understanding, experiencing and embodying of unity awareness and a unitive new narrative to serve collective and planetary healing and conscious evolution.

She has experienced multidimensional realities since early childhood, worked with the wisdom keepers of many traditions and has a Ph.D. in Archaeology from the University of Reading in the UK researching ancient cosmologies and a master’s degree in Physics from Oxford University, specializing in cosmology and quantum physics. International best-selling and award-winning author of six nonfiction books, her latest is The Cosmic Hologram: In-formation at the Centre of Creation. Her next book The Story of GAIA (see below) sharing the evolutionary story of our living planetary home, is due to be published in October 2022. 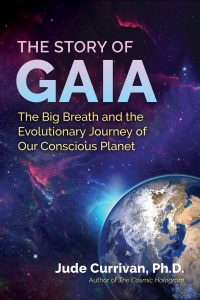 The Story of Gaia

The Big Breath and the Evolutionary Journey of Our Conscious Planet

Explores how the Universe, our planet, ourselves, and everything in existence has inherent meaning and evolutionary purpose.

Exploring our emergence as self-aware members of a planetary home and entire Universe that is a unified and innately sentient entity, Jude Currivan, Ph.D., shows that mind and consciousness are not what we possess but what we and the whole world fundamentally are. She reveals our Universe as “a great thought of cosmic mind,” manifesting as a cosmic hologram of meaningful in-formation that vitally, exists to evolve.

Sharing leading-edge scientific breakthroughs, and showing how they support traditional visions of Earth as a living being—Gaia, the author details the 13.8 billion-year story of our Universe and Gaia, where everything in existence has inherent meaning and evolutionary purpose. Showing how the Universe was born, not in an implicitly chaotic big bang, but as the first moment of a fine-tuned and ongoing “big breath,” she shares the latest evidence for the innate sentience that has guided our universal journey from simplicity to ever-greater complexity, diversity, and self-awareness— from protons to planets, plants, and people. She explains how evolution is not driven by random occurrences and mutations but by profoundly resonant and harmonic interplays of forces and influences, each intelligently informed and guided.

Currivan shows how, in Gaia, the Universe’s evolutionary impulse is embodied in collaborative relationships and dynamic co-evolutionary partnerships on a planetary scale and as a wholistic gaiasphere. She reveals how the conscious evolution of humanity is an integral part of Gaia’s own evolutionary progress and purpose. And, as she explains in vivid and moving detail, by perceiving and experiencing our planet as a sentient being and ourselves as Gaians, we open ourselves to a deeply ecological, evolutionary, and, above all, hopeful worldview.

The fitting and fabulous flowering of a myriad investigations into our planet’s life story over the half century since James Lovelock brought ancient knowledge of a living Earth into modern science, reviving the ancient Greek name for Earth in calling it Gaia. Jude Currivan, embedding this brilliant new biological-to-spiritual telling into her Cosmic Hologram, roots us solidly as Gaian creatures who are coming to understand our spiraling cosmic and earthly journey “from Unity, to Unity in diversity, to a re-membered Unity in belonging and an ultimate return to Unity.” With this self-knowledge we cannot fail to do better by Gaia and thus for ourselves. The future we dream of is ours to co-create! Elisabet Sahtouris,PhD; evolutionary biologist and author of Gaia (1988), EarthDance (1996) A Walk Through Time (1998) and Gaia’s Dance (2014)

Gaia: Her-Story is an amazing book. It tells the story of the Universe as the setting of the story of our planet.  And it tells who we are, and what being the children of Gaia means for our life and our future—indeed, for the future of humanity on the planet and for the future of the planet in the Universe…  Perhaps the greatest story ever told—now told with the authority of cutting-edge science. Ervin Laszlo Whole systems theorist, philosopher, author and founder Club of Budapest

Jude Currivan, Ph.D., is a cosmologist, futurist, planetary healer, member of the Evolutionary Leaders circle and previously one of the most senior business women in the UK. She has a master’s degree in physics from Oxford University and a doctorate in archaeology from the University of Reading in the UK. She has traveled extensively, worked with wisdom keepers from many traditions, and is a life-long researcher into the nature of reality. She is the author of 6 books, latterly The Cosmic Hologram, and is co-founder of WholeWorld-View.

Quick Links:
Sign up for the newsletter
Book Reviews
Make a donation

Page load link
We use cookies on our website to give you the most relevant experience by remembering your preferences and repeat visits. By clicking “Accept”, you consent to the use of ALL the cookies.
Cookie settingsACCEPT
Manage consent

This website uses cookies to improve your experience while you navigate through the website. Out of these, the cookies that are categorized as necessary are stored on your browser as they are essential for the working of basic functionalities of the website. We also use third-party cookies that help us analyze and understand how you use this website. These cookies will be stored in your browser only with your consent. You also have the option to opt-out of these cookies. But opting out of some of these cookies may affect your browsing experience.
Necessary Always Enabled
Necessary cookies are absolutely essential for the website to function properly. These cookies ensure basic functionalities and security features of the website, anonymously.
Functional
Functional cookies help to perform certain functionalities like sharing the content of the website on social media platforms, collect feedbacks, and other third-party features.
Performance
Performance cookies are used to understand and analyze the key performance indexes of the website which helps in delivering a better user experience for the visitors.
Analytics
Analytical cookies are used to understand how visitors interact with the website. These cookies help provide information on metrics the number of visitors, bounce rate, traffic source, etc.
Advertisement
Advertisement cookies are used to provide visitors with relevant ads and marketing campaigns. These cookies track visitors across websites and collect information to provide customized ads.
Others
Other uncategorized cookies are those that are being analyzed and have not been classified into a category as yet.
SAVE & ACCEPT

This free eMail list keeps you up to date with news from GreenSpirit. Your privacy is important to us, we do not pass on your email address to anyone and you can unsubscribe at anytime.  * indicates required