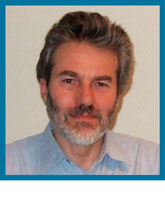 Trevor Sharman  lives in Ealing in West London and loves living in the diverse bustle of a great city and also spending as much time as he can in countryside. After working for many years in social work and community development he now does what he likes. He likes to grow some of his own food in his nearby allotment and is a former holder of The Bill Green Cup for mixed salading, a career highpoint! He still works with community organisations and has helped initiate a Transition Town initiative in Ealing.

He has been involved in Be The Change and The Work That Reconnects, training as a facilitator in awareness raising about the need for a transition to a sustainable way of living and engaging with the sense of sacredness of life. He claims that he is “still re-training to become an environmentally sustainable, socially just and spiritually fulfilled human presence on Earth.” Trevor has been involved with GreenSpirit for some years, having been a participant in a ‘Co-operative Enquiry’ into living in a sacred way with other GreenSpirits and having been knocked out with David Abram’s books and talks and Brian Swimme & Thomas Berry’s work.

Hilary Norton lives in East London. Her four children are grown up but apart from one son (with family) in Japan, they live nearby.  She loves being in the east end, and cycles to work in Tower Hamlets as an advisory teacher for ICT and Special Needs, helping kids with their learning, mostly using specialised computer equipment and software.Hilary believes strongly in making cities greener places to be, so supports the London Wildlife Trust, Woodcraft Folk, sustainable architecture, allotment gardening and local Green initiatives. She sings in a local community choir, grows veggies, fruit and flowers on her allotment. She periodically becomes a Tudor for 16th century re-enactment, through the medium of her alter ego, ‘Etty’ who works in the woolshed on the Manor of Kentwell Hall,  spinning and weaving. Hilary says: “I love this because it is a place where many young people learn ancient crafts (e.g. cheese making, basket weaving, bee keeping, spinning, turning etc) and perpetuate them.”

Hilary has played a key role in GreenSpirit since the mid 1990s. As well as serving on Council, she runs a local GreenSpirit group in Stratford and organises both the annual GreenSpirit walking holiday/retreat and ‘Wild Week’ in Snowdonia.

Ian Mowll is GreenSpirit’s Administrator and many people’s first point of contact with the organization. It is a role that he loves. Ian’s career started with computing in the financial markets, followed by charity/social enterprise work and now he is more and more involved in spiritual development.

Some of the things he loves to do are: playing his bass guitar, cooking, storytelling, 5 rhythms dancing and having mad ideas. He   lives in Stratford, East London.

Ian has been involved in GreenSpirit since 1999 and sees it as his spiritual home. He says: “Finding GreenSpirit was the first time I found somewhere where I truly felt I could be spiritually ‘me’ without having to pretend. When joining GreenSpirit, occasionally people use the phrase ‘welcome home’ – a phrase that feels good to me.”  He is also   involved with the Interfaith Foundation and an independent celebrant.

Stephen Wollaston is an ordained interfaith minister and was given the name Santoshan (contentment) by an English swami. He holds a degree in religious studies and a post-graduate certificate in religious education from King’s College London. He also studied typographic design, as well as transpersonal psychology for three years. In the late 70s he was the principal bass guitarist of one of London’s first punk rock bands, The Wasps. He has taught world religions and other humanities subjects, English language, and academic writing at various educational establishments in the UK and at a medical university in the Middle East. He was also a long-time close friend of the late UK medium and former Benedictine monk Glyn Edwards and co-wrote his first two books with him.

In all, Stephen is an author, co-author and editor of more than twelve books, including Spirituality Unveiled: Awakening to Creative Life (Earth Books paperback, 2011; new eBook edition, 2020), The House of Wisdom: Yoga Spirituality of the East and West (Mantra Books, 2007), and Realms of Wondrous Gifts: Psychic, Mediumistic and Miraculous Powers in the Great Mystical and Wisdom Traditions (revised 3rd edition, 2020).

Along with being a council member, he is also the main typographic designer of GreenSpirit magazine and the GreenSpirit Book Series and has compiled, edited and written titles in the series. See his Facebook page for further details.

Chris Holmes’s conversion to a green ethos was gradual but thorough. He worked for nearly three decades in the financial markets , and as Director of a large City institution was instrumental in the introduction and development of  ‘green’ investment funds – one of the few activities he feels good about during this period! Since leaving the financial sector in the mid 1990s he has spent his time in voluntary work and developing a range of eco-related interests.

His hobbies include working three organic allotment plots, walking, running, natural bodybuilding, tennis, playing guitar and banjo, the Christian contemplative tradition and retreat movement, local history and the poetry of John Clare. Chris is married to Jill, also a ‘greenspiriter’, and lives in Surrey. He has been involved with GreenSpirit for 12 years and on the Council for most of that time. He says: “It is home for me emotionally, intellectually and spiritually. I feel blessed to be part of this movement.”  He is also involved with the Green Party, Garden Organic, the John Clare Society, the Thomas Merton Society among others.

Formerly a transpersonal psychotherapist/workshop leader/health educator with an MA in East-West Psychology, Marian Van Eyk McCain officially ‘retired’  in 1996 to concentrate on her writing. She is the author of seven books  and editor of the anthology GreenSpirit: Path to a New Consciousness. As well as writing essays and articles on a wide range of subjects, including include wellness, stress-management, psychology, women’s health and aging, green spirituality, organic food production, simple living and alternative technology, Marian is also a blogger, a columnist for ‘Crone’ Magazine, Editor of the ‘Elderwoman Newsletter’ and co-Editor of  ‘GreenSpirit.’ She runs a local writers group and an online social network for elderwomen. Her other interests are Permaculture, hiking, reading, word games and travel.

Marian lives in North Devon with her American partner Sky and spends part of each year in Europe and the USA. They have four children and eight grandchildren. She has been a member of GreenSpirit for many years. Her main website is www.elderwoman.org

Like many others in GreenSpirit, Emanuela Marchiori had a ‘green’ childhood. She was born in Bassano del Grappa in the Veneto region of northern Italy, where her family had lived for many generations, and she describes her early years as living through the end of an era. “There were still fields and farms,” she says. “Fields with grapevines and fruit trees and corn for polenta. But they were also building roads, houses, factories. I caught just the end of a world that had been more or less the same since at least the time of the Romans and probably before, and yet it changed so fast. My aunt used to take me around the fields and show me which plants were edible. I remember one of them in particular; she called it ‘pane e vino’  (bread and wine). You chewed the stem and it tasted like bread and wine. Now it is all cement and shops and the farms and that way of life and most of the local dialect has gone.”

Emanuela came to live in Reading fifteen years ago and works at Reading International Solidarity Centre. RISC is a Development Education Centre which works with schools and community groups to raise the profile of global issues and promote action for sustainability, human rights and social justice. She is an active member of the local GreenSpirit group and joined Council in 2013.

In response to his heartfelt need to think differently, from his conditioned thinking, about the natural world, he is exploring an earth centred consciousness that engages people’s hearts and minds, creatively, with Mother Nature. He finds that new values, morals and ethics emerge from such adventures which, in turn, inform his actions in the world.

Richard first came across GreenSpirit  in the mid 1990s  at St James’s Church, Piccadilly, London, when informally researching the life of William Blake. He finds GreenSpirit to be a stimulating and nurturing community that engages with issues relevant to the human and other than human communities.

Jane Stott has been on a spiritual path – not aligned with a single tradition – for some thirty years. She spent fifteen years in community, first at Gaunts House then at the Threshold Centre in Dorset, which she helped to set up.

Her professional career was spent in training and organisational development in both the public and voluntary sector. She also trained as a Spiritual Companion with William Bloom, and now run groups to support others’ spiritual paths.

Jane loves walking in woods, and is an active member of Tree Sisters.

Chris Newsam lives in Malton, North Yorkshire with Janice his wife, Edith his mother-in-law and Sophie, a Saluki cross. Between them Chris & Janice have 8 children and 9 grand children.

Chris spent much of his career in sales and marketing and latterly in charity management and professional fundraising. He helped found a charity supporting refugees and asylum seekers. He is a Quaker of some 20 years, with a passion for the Earth and Nature that has led him into standing as a Green Party Parliamentary Candidate and organising and facilitating several conferences and seminars. Chris has many years experience in public speaking and has been instrumental in establishing and helping run a local GreenSpirit group. He considers himself as a social, human rights and environmental activist and has been active in many campaigns. He also helps to administer several Facebook groups and maintains an active interest in digital outreach and communication.

Chris has been associated with GreenSpirit for over 10 years and is thrilled to have been invited to join Council. He says ‘I am delighted to serve this wonderful charity and consider it to be my spiritual home’.